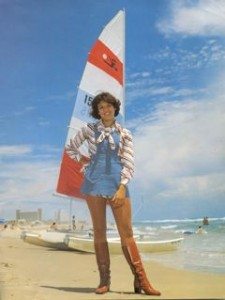 Our struggle in those days began as a request to have written rules. Lamar Muse, then President of Southwest Airlines, told us that “if you have a problem, get yourself a ***damn union,” and our Flight Attendants began their journey into workplace democracy. Although hired for our “looks and legs,” and not coming from Union backgrounds, the courageous group of Flight Attendants became the second Unionized workgroup at Southwest Airlines, after the Mechanics.

Since we were such a small group, we originally were organized under TWU Local 513, representing the Ramp and Maintenance workers at American Airlines. Our first Chairperson was Sandra Bogan and our Vice Chairperson was Paula DeArmon. They negotiated our first and second Contracts in 1975 and 1978. Paula also went on to negotiate the 1981 Agreement.

Texas, at that time, was an “open shop” state, and because Southwest Airlines did not fly outside of Texas, Employees could choose whether or not to join the Union. By 1980, even though it had established written work rules, only 35 percent of the Flight Attendants were Members of the Union. People were afraid to be associated with “troublemakers,” and Southwest Management constantly challenged and ignored Contract rules, while pressuring Union Members. 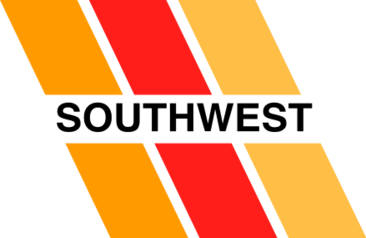 The Southwest Flight Attendants then rallied behind the issue of ‘hot pants’. A group led by Julie Waker, Sharon Darby (Rauch), Paula DeArmon, Susan Goodman, and myself organized a challenge to the status quo. It was extremely important to the women working at Southwest to settle the hot pants problem before we could hire male Flight Attendants and before the Contract Negotiations began in 1981. Hot pants brought unwanted attention to ourselves, and we felt we should not have to sacrifice our dignity for higher wages. Therefore, the push to change the uniform began.

The Flight Attendants filed petitions to have their uniforms changed, and threatened a lawsuit; the Company conceded. Management’s first offer was to allow us to wear pants from January through March. We explained that discrimination happened all year long; thus, their offer was not acceptable. An alternative uniform of a wrap around skirt worn over hot pants was designed, just in case we ever wanted to remove the skirt and wear the hot pants. We agreed, and were required to wear the hot pants under our skirt, but dared them to look under our skirts to see if we were actually wearing them.

The hot pants issue motivated our workgroup, and volunteer Union Membership jumped to 75 percent. By May 1981, when Contract Negotiations began, our Membership was a staggering 98 percent. This increase in Membership served to strengthen our position in Negotiations.

Today we would call this “internal organizing,” but at that time we were just angry. Management completely understood that the Flight Attenants were motivated and that we were ready to take them on to achieve better working conditions and wages.

The new Contract included pay increases of 52 percent over two years, single rooms in crew hotels for all Flight Attendants, as well as sweeping changes to work rules. This Contract was regarded as the best in the industry. 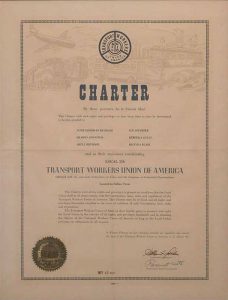 In October 1981, we left the umbrella of Local 513, and were officially chartered as TWU Local 556. Our first President was Susan Goodman, with Sharon Johnston as Vice President, Shell Brummel as Secretary-Treasurer, Sue Spurrier as Recording Secretary, and Rebekka Kelly and Belinda Blair as Board Members.

From 1981 to 1983, after deregulation, the airline industry became extremely unstable. The 1983 Contract, while managing to maintain progressive work rules, also adopted a “B” scale paying New Hires less while offering a 26 percent raise to “A” scale Flight Attendants. This was extremely controversial, but happening throughout the industry; it passed, despite our best efforts.

Unfortunately, the practice of creating new pay scales haunted our Membership. It continued in the 1986 Contract with the creation of the “C” scale, and again in 1992 and 1997 through the addition of numerous steps to reach top pay. These scales and steps divided our Membership with every new Contract.

In 2002, TWU Local 556 Leadership realized that the only way to overcome this division was to make a real effort to unite the Membership. The Executive Board agreed that Negotiations would have to be done in a different way. Membership involvement was paramount. The Negotiating Team decided that each Member would receive representation whether they had been on the seniority list for thirty days or thirty years, and the number one priority was fairness for all. The result was a Contract that included new hire training pay, reduced steps to top-out, elimination of the different pay scales, while also creating industry-leading work rules and pay.

Now, in the present day, we have continued to better our Contract. Under the leadership of Thom McDaniel and the Contract ‘08 Negotiating Team, we achieved increased 401(k) match, more flexibility in our schedules, wage increases, and many other positive changes to our work rules.

Southwest Airlines is now the most Unionized airline in the industry, and it is not an accident that we also have some of the best working conditions in the industry. However, let’s not forget where it all started. Those 29 Flight Attendants who voted “yes” for our Union changed the course of our careers, and we owe them all a big thank you.

We use cookies to offer you a better browsing experience, analyze site traffic, and personalize content. By using our site, you consent to our use of cookies.
AcceptRead More
Manage consent

This website uses cookies to improve your experience while you navigate through the website. Out of these, the cookies that are categorized as necessary are stored on your browser as they are essential for the working of basic functionalities of the website. We also use third-party cookies that help us analyze and understand how you use this website. These cookies will be stored in your browser only with your consent. You also have the option to opt-out of these cookies. But opting out of some of these cookies may affect your browsing experience.
Necessary Always Enabled
Necessary cookies are absolutely essential for the website to function properly. This category only includes cookies that ensures basic functionalities and security features of the website. These cookies do not store any personal information.
Non-necessary
Any cookies that may not be particularly necessary for the website to function and is used specifically to collect user personal data via analytics, ads, other embedded contents are termed as non-necessary cookies. It is mandatory to procure user consent prior to running these cookies on your website.
SAVE & ACCEPT